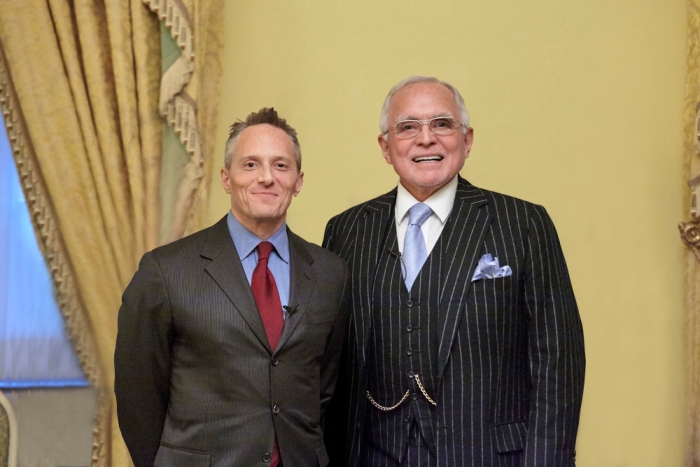 Dan Pena’s method of coaching is pure shock and awe. People either love him or hate him, and that’s exactly the way Dan likes it.

His mission is to rattle people out of their comfort zones, make them do what they need to do in order to become the best they can be.

And you know what, as much as it pains me to admit it sometimes, the old man is always right.

He likes to do things properly, and if you ever get the chance to visit Guthrie Castle you’ll see for yourself that he runs that place like clockwork.

Every lawn is mowed smooth, every sheet is crisp and spotless, every meal and every drink is served at the correct time.

It goes without saying that Dan changed my life, but here are three of the key lessons I learned from the 50 Billion Dollar Man:

Dan is the first to tell you not to project any “Mother Theresa sh*t” onto him. He does what he does because he wants to be the best, and that’s all there is to it.

Frankly, I know Dan is no saint! Having said that, he does what he does for more than just pure ego too. I think it actually causes him pain to see unfulfilled potential.

It could be his military background, it could be his LAPD dad. Whatever it is, I believe Dan’s fundamental passion is seeing people reach the best of themselves. It’s not compassion, he just gets a kick out of it.

Like Dan always says, “If we were at war, we’d all be dead!” Basically, if we have to do things to the best of our abilities in battle, why not do them that way in our daily lives?

Living life at our fullest potential is inherently valuable, and being around Dan brought that home to me in a big way.

One of Dan’s favourite stories is flying out to meet his dad in Europe during the Korean War. His dad was head of the CID for the forces, and by all accounts a bad ass.

When Dan meets his dad he realises he is covered in blood. His dad had just had surgery to have a tumor removed, but insisted on being allowed to meet his son at the airport.

Years later, when Dan was in a doombuggy accident which shattered his shoulder, punctured his lungs and liver, and broke eight ribs, he still made it to a meeting with a top mentee and the managing partner for PWC.

The point here is commitment. Dan never misses a meeting. It’s not about politeness, or being pedantic, it is about mental discipline.

If you can’t follow through on every commitment you make then how can you expect to reach your full potential?

Dan never makes an excuse, and a near death accident is no exception. If he says he’s going to do it, he’ll do it, and he has his father to thank for setting that example.

3. Focus On The Few And Not The Many

This goes back to Dan’s no holds barred, rattle your cage approach to mentoring.

Once Dan is done with you, you shed your BS, you get rid of all the excuses and defences that hold you back from achieving your potential.

This means streamlining your peer group, not being so politically correct, and most importantly you stop wasting your time and energy on people and projects that don’t pay off.

One thing I have noticed on the new Business Accelerator course we are doing on the Academy, is I am only interested in investing in the few people who are willing to go the distance.

The course is not everyone, because it’s hard, it means confronting yourself. It means being able to hear things you don’t want to hear.

The course is exclusive and difficult to get onto, and I like it that way, because I know I can’t help everyone. I can only help a select few who are willing to show commitment.

I’m only interested meeting and helping the elite minds who are passionate about change, who are willing to do the heard work inside and outside, to fully realise their dreams.

And everyone else? Good luck, is all I can say.

So these are the top three lessons I learned from Dan. It’s rare that Dan tells someone something they don’t already know.

They just don’t want to face it, and his full on, uncompromising energy either makes you confront your limitations and push through, or makes you run and hide for cover.

In the end, it is about action and accountability. I’ve said it before, but it bears repeating, meeting Dan was like taking Ayahuasca.

You hear what you don’t want to hear, and you are forced do what you are too scared to do.

Dan blasts through your psychic defences and opens up a sense of possibility. You realise the only thing between you and your dreams is YOU!

Good luck with whatever dream you are working on, and remember – “Just Fucking Do It!”